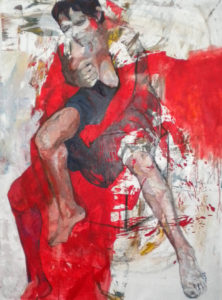 Yovani Bauta is a Cuban artist.

He graduated from the National School of Arts in Havana, Cuba, as Professor of Painting and Drawing. He is also an Attorney at Law from the University of Matanzas, Cuba. His artwork has been exhibited in many countries such as Germany, France, Mexico, Spain, Switzerland and the United States, as well as in Cuba. His work have been reviewed and published in different art magazines and books in Mexico, France, and the United States. Mr. Bauta has lectured at the New School of Social Research, in New York; at Florida International University; and at the University of Michigan, among other academic institutions.  He founded and performed for 10 years in “Seña del Humor” , a humor ensemble that allowed him  to collaborate as an actor in Liborio Wants To Escape  a performance by Leandro Soto in United States and Mexico respectively. Another media used by Bauta is installations, such as Male I.D. Artemis PS747, 2000 and University of Miami, 2001.

His essay “Los cuerpos de la nación” was published by Baquiana Editorial in May 2003 and launched at the University of Cadiz, Spain where he participated as a panelist in the conference Intelectuales Cubanos de la Diaspora.

In the last few years his work has been shown in more than twenty solo exhibition and many group shows in Europe and America.

Head in the Bathrooms, Installation at restrooms at MDC Museum of Arts + Design.

2004 Through my Own Eyes, Arizona State University Art Gallery, Phoenix

On the Street, recent works by Yovani Bauta, ed. Blurb, May 2011

The Davis Lisboa Mini-Museum of Contemporary Art in Barcelona.

Printing etchings and monotypes at the California Printmakers with Louis F. Dow II.