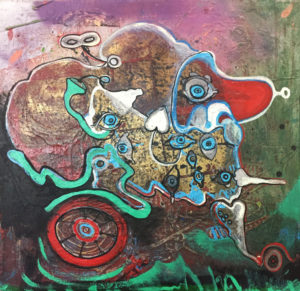 Rudolf Kohn was born in Bogota, Colombia in 1971. He began his first drawings at age 3 and his first apprenticeship at age 13 with David Manzur. Then went on to completing his degree in Art at Universidad de los Andes (1992), simultaneously, apprenticing with Augusto Ardila. Rudolf’s first exposition was at age 18 with Acosta Valencia Gallery, later with Galeria el Museo in Bogota, Colombia. Raised during political turmoil, Rudolf’s artwork is undeniably influenced by politics of the country.

His works are alive as satirical anecdotes, illustrating history past and that is yet to come. He creates from an expressionist inspiration blended with surrealism equating intense and dramatic, yet finely tuned conceptual pieces. Commenting on our world, our time, and the reality of society. Rudolf has several themed series of works, Vicharros (2002), Ozotron (2006), City of Love (2009), Guerreros del Espacio (Space Warriors) (2010), and Made in China (2013). Vicharros brings machines to life on the canvas to meet humans who have become machines. Kohn commonly depicts Vicharros as bicycles- the vehicle of our inner child that may free us from mechanical confines. Ozotron focuses on a futuristic super hero whose mission is to purify nature in order to enable survival of our species. City of love is unique through the multitude of eyes displaying the forever presence in all of what we may think is absence. Guerreros del Espacio shows the shaman’s work with universal energy, sacred geometry and medicines in relation to native traditions around the world. Made in China is a symbolic representation of the economic crisis and growing interdependence of the US with China. Rudolf Kohn artwork is commonly found in large format pieces using mediums of oil and acrylic on canvas, drawings, and most recently, stainless steel sculptures.

Rudolf arrived in Miami, Florida in 1992 starting his work as an artist resident at the Bakehouse Art Complex (BAC). In his new arrival he participated in group and solo exhibitions for BAC. From 1992-2015 Rudolf has been widely recognized and exhibited in Florida, New Jersey, New York, New Mexico, San Francisco (McLoughlin Gallery), Mexico, Puerto Rico, and Colombia (La Pared Gallery). In Miami, choice exhibitions and galleries that have shown his work include, The Wintz Gallery at the first National Bank of South Miami ‘95, The Biltmore Hotel- Danielson Gallery ‘95, Galeria del Sol ’96. Several solo exhibitions at the Consulado General de Colombia in Coral Gables. The Bird Road art Connection (1997). Cultural Resource Center (1998). Rudolf featured a solo exhibition with the ‘City of Love’ at Miami Art Space in 2009. The Red Bull, Art of Can Exhibition 2010. Rudolf served as Executive Director, Curator, and featured artist for Burst Art Fair during Art Basel Week 2011. Kohn’s work was displayed at Americana (2013), Contemporary Caribbean and Latin American Art. He has participated in the annual ARTcycle events Seafair (2014) and in Coral Gables Museum 2014 and 2015. His sculpture was exhibited at the Frost Art Museum, Sculpture Garden (2014). Kohn sculptures have also been shown at the JF Gallery in West Palm Beach and the West Palm Beach Art fair (2014). Art Basel 2014 Rudolf was in a group exhibit showing paintings and sculptures at Praxis Architecture Space and a group exhibition at MOCA during  Art Basel 2015.

Rudolf has been covered extensively via media in the Miami Herald and the New Herald. Also, Loft Magazine, outside of FL in Art America, and publications in Colombia and Cancun, Mexico. Kohn has artwork in private collections in US, Europe, Colombia, England, Brazil and Dubai.