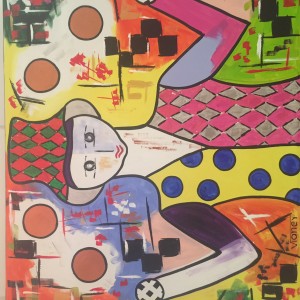 Vianey, born and raised in Villavicencio Colombia. He grew up wanting to be an artist. His early career as an artist began in the theater. As most young artists, he always had the dream of studying Contemporary Art in New York, and today he is living in that city.

His artwork is known for figurative colorful faces and abstract patterns.

It is through painting that he finds his way to convey the message that the world is a stunning place. In 2012 he was invited by the Grau Foundation, to participate in an exhibition to honor Colombian artist Enrique Grau, in Bogotá, Colombia. This was an important recognition, as it was Enrique Grau, along with Fernando Botero, Alejandro Obregon and David Manzur who helped establish Colombian art internationally. It is paradoxical that it is in the United States where Vianey started getting recognized as an artist, but after this event he is getting considerable attention in his native Colombia. His art is mainly collected by, recently Hollywood actor John Leguizamo’s mother, Luz, and the famous Venezuelan actress Gaby Spanic joined Vianey’s list of collectors.

Vianey also joined Colombian leader and designer of leather fashion, Mario Hernández, and together they launched the line “Vianey“, by Mario Hernández, which includes handbags and accessories. This line of products is available in museums and art stores in New York, Colombia, Miami (Art District Design), and other countries through Mario Hernández’s own stores.

During 2015, Vianey spent a couple of months working out of Venice (Italy) in preparation to his Spring 2015 exhibition. Vianey mainly works from his New York studio but you can see him across the globe getting inspiration or helping several charities in which he is involved.