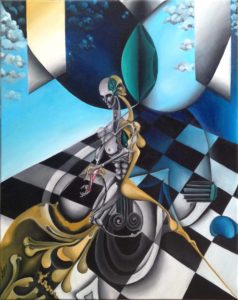 Born in North East France in August of 1992, Marc is not only a medical student but an up and coming young artist who won this year’s Salon de l’Automne prize in Paris for artists under thirty in 2015 and then again in 2016.

This multi-talented autodidact has managed to create a body of work inspired by ancient myths and modern sensuality. His works  reflect musical undertones as he is also a performing musician enamoured with lyrical themes which are so often present in his paintings.

For the first time ever, Marc’s work is available for viewing and for sale in the USA through the White Porch Gallery @ R house Wynwood.