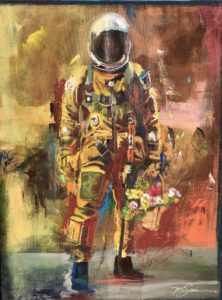 My style is constantly evolving, I primarily focus on representing external reality by adopting an admirable assortment of spontaneous colors, creating an atmosphere capable of exerting energy. Through my artwork, I try to bring the outside in. I decontextualize. Then, I reconstruct.

At the age of 22, Brooklyn born with deep Puerto Rican roots, JonLouis established himself as one of the youngest most unique artist globally. Developing his own style focused on representing external reality by adopting an admirable assortment of spontaneous colors, creating an atmosphere for the viewer to perceive the energy. Not only have his paintings caught the attention of influential collectors around the world, but also Jonlouis uses his art to propel his community. Donating pieces for multiple notable charities, giving speeches for Congress Woman Frederica Wilson and showcasing his art in acclaimed Television shows. JonLouis’s work is an illustration of internally driven courage to be creative, but most importantly courage to make a real change.