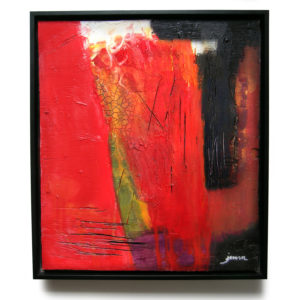 Janet Mueller was born in Champaign, IL. She has a Bachelor of Science in Marketing, College of Commerce from the University of Illinois, 1975. Janet worked as a graphic designer and a producer of advertisements in TV and print winning 11 awards for creativity. In 1989 she won a Best of Show award for a direct mail piece for the University of Illinois. That same year she was commissioned by Spiegel Catalogue to create 900 hand painted caftans and 1000 signed, numbered prints for their Christmas gift book.

In 1993, Mueller moved to Key West, Florida. She has had 13 solo exhibitions including a show in Chelsea NYC in 2017, and participated in numerous group shows in cities across America. In 2001 she was invited to show her collection of paintings in Rome, Italy at the Centro per L’Assistenza Sociale e Culturale.

In December 2008, Janet Mueller moved to Miami Beach, FL. Mueller was chosen to paint a 93 foot wall in the courtyard of R House, Miami in 2013. In 2017, she and Donnie Cloman of MSG Concepts painted the pavers and concrete.