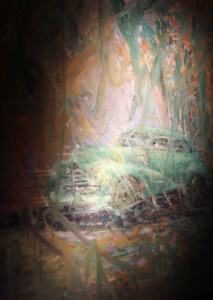 Born on December,1966 in Batabanó, Havana, Cuba. He studied art at the San Alejandro School of Art in Havana and graduated in 1985. Since then, he participated in several worldwide art exhibitions. In 1986, he worked as an art Instructor in Casa de Cultura in Batabanó. In 1992 he graduated as a professor of Art at the Instituto Superior Enrique J. Varona, Havana, Cuba. At the same time he was a professor of Drawing and Workshop at this institute. In 1996, he was the artist chosen to design the logo, poster, and the program for the Cultural Center of Spain in Havana. This same year, he designed the poster for the XVIII International Festival of the New Latin America Cinema Havana. In 1998, he served as a professor of Drawing at the San Alejandro School of Art. In 1999, he designed and built the background set of the stage for Abelardo Estorino’s play The Dance for the Spanish Repertory Theater in New York City. In 1999, he taught Workshop to first year students of the Instituto Superior de Arte (ISA) in Havana Cuba. Since 2002, he has been living in the city of Miami in The United States where he has been part of many exhibitions, Art Fairs and Auctions. He has also been teaching Drawing and painting at the Miami Art Club.