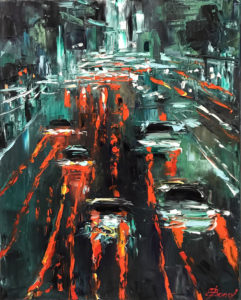 Elena Bond was born in Russia in the beautiful old city of Samara on March 20, 1965 to a military doctor and a classical pianist. Elena started drawing at a very early age, using everything from a pencil to her mother’s make-up. She came from a family of artists where her great-grandfather and grandfather were both artists.
Because of her father’s job in the military, Elena’s family had to move around the Soviet Union frequently. She’d lived in Kazakhstan, Byelorussia, Ukraine, Latvia, Litva, St. Petersburg, and Moscow. The largest part of her childhood was spent in Germany. Because of the frequent lifestyle changes, Elena was able to preserve memories of many different cultures and experiences. At the age of 11, she attended her first art school in St. Petersburg, Russia…

It is from this early experience, that she came to the conclusion that she could be nothing other than an artist. The students of this particular school spent most of their time at museums such as the Russian Museum and Ermitazh, where they learned not only basic art, but also theory. Elena’s family moved to Middle Asia, which was then part of the Soviet Union, to the beautiful, sunny, and friendly state of Uzbekistan. At 15, she attended the State College of Art in Uzbekistan majoring in Scenic Design which she completed with honors. She then went on to study at the Academy of Art, where she earned a master’s degree in Fine Art. During this time, Elena took part in many international, state, and city exhibitions. She became a member of the Artists’ Union of Uzbekistan. She also worked in theatres creating set designs for the State Theatre of Opera and Ballet, and the Bolshoi Theatre in Moscow. Returning to Uzbekistan, she continued her work in theState Museum of Art as a restorer, teaching at the local University, and participating in exhibitions.
In her painting, she has tried many styles and techniques, from simple still life and portraits to difficult, philosophical, multi-figured art. Whatever she paints, her main goal is to be honest and to love what she creates. With the dismantling of the Soviet Union life changed — the divisive issues of nationality and religion resulted in the loss of wealth and stability for so many Soviet citizens.

Fortunately, in 1999, Elena’s family won a Green Card Lottery and immediately moved to the United States, where Elena was able to resume her painting both recreationally and professionally.