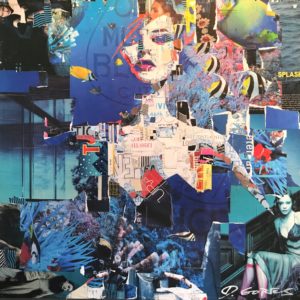 The Rhode Island School of Design grad lives and works in Melbourne, Florida, exhibiting and curating with the bold upstarts there, surrounded by the intellect and culture of the Space Coast. Derek was honored to have his work selected for the Manifest Hope DC exhibit coinciding with the Presidential Inauguration in 2009, and in 2010 he was named “One of the 40 important artists of the New Contemporary Movement”, while in an exhibition in London.

“I like my pictures to barely come together with teasing little details. Sort of like how the mind can’t help but wander, even when trying to focus on one thing. In the collages, some of the little bits I use are deliberate, but in most I’m trusting randomness to help build an end result more interesting than I could have planned. One friend calls it a ‘Zen Narrative. ”