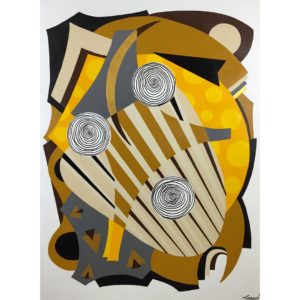 Torezan is a Brazilian-born painter currently living and working in South Florida. Inspired by representations of the future produced in the Mid-20th century, Torezan developed his unique style creating hard-edged compositions, flatly painted on a variety of backgrounds. In his paintings, geometric and organic forms seem to be floating around each other evoking  a sense of depth, as though the shapes were eternally suspended in space. The  contrasting colors enhance the dramatic and exuberant effect, creating an overall sensation of blossoming and burgeoning life. His influences range from the work of the pioneers of abstract art to Brazilian modernists, not only in the  plastic arts but also architects such as Oscar Niemeyer and  the landscape designer also painter Roberto Burle Marx.  Torezan has  exhibited his work in a number of  museums, art galleries and prestigious Art Fairs, including Art Wynwood , LA Art Show, Parallax Art Fair London and Conception Art Fair during the Art Basel Miami Week. His artwork is currently part of private collections throughout USA, Europe, and Brazil.